The beauty of John’s Gospel, with passages like, “God so loved the world, He gave His only begotten son,” is part of a racist, 2nd-Century forgery, according to Tony Jones, the Emergent Evangelist. But he does respect the Didache, and wrote a book praising its virtues. The brook promo explains:

[The Didache] is “the most important book you’ve never heard of.” It spells out a way of life for Jesus-followers, including how to show one another the love of God, how to practice the Eucharist, and how to take in wandering prophets. (from The Didache Online) 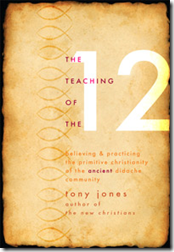 Here is classic irrelevance from the Emergent-Postmodern world: “how to take in wandering prophets.” The answer is found in the Didache, an ancient and mysterious book now embraced by Emergent Church leaders.

Didache is the Greek word for “teaching”. The book was mildly-popular for a while, beginning in the 2nd Century. Although it claims to be “The Teaching of the 12”, the authorship was never known, although it probably was Jewish. Nobody thinks it was penned by any of the 12 disciples.

It is a very silly book, however, bloated with rules for baptism, fasting, “the Eucharist”, and tons of arbitrary ethics. Fun-city. It plagiarizes parts of the New Testament, adds silly thoughts, and redefines biblical Christianity (a cause shared by Jones).  Scholarly consensus agrees the Didache was in circulation as early as 110 AD, but as a PhD candidate, Jones says it was written much earlier by the original Jewish-Christian community. He certainly places it earlier than John’s forged gospel.

If this review is too harsh, read a few excerpts from the Didache (with my “study notes” in brackets):1

So go the ramblings of the Didache. Go buy Jones’ book to study it more. Read it online for a real hoot, or listen to Jones read it. Then praise God there were people with enough brains to recognize it as just another one of the Pseudepigrapha2 floating around at the time.

As I said before, it’s a wake-up call. Solomon’s Porch is loaded with people just like you and I. How could they get sucked into this?