It seems like Ohio is at the center of global events these days. Few appreciate how Ohio may soon play a significant role destroying Western Civilization as we know it, while at the same time toppling the world’s Oil Cartels. Allow me to introduce the multi-factorial sides of Ohio, “The heart of it all.”

First, consider the political arena: The nation held its breath while Ohioans picked the world’s most powerful leader, according to political pundits. This alone is a Western Civilization-buster for Rabid Republicans. Newspapers from the cultured East Coast to the degenerate West proclaimed Ohio the key, pivotal state in the Presidential election, closely followed by Virginia and Florida. It means Ohio is a big, Political Boss. The candidates agreed with open wallets and a blitzkrieg of TV ads, much to the dismay of the coastal states.

(East Coast cartoon by Nick Anderson in the Philadelphia Courier-Journal.)

“If you live in Ohio, Barack Obama and Mitt Romney are giving you a lot of love,” the LA Times complained. Why the love? “All their attention goes to the troublesome kids, not the compliant, quiet ones.”

What a hooter! When Los Angelinos call Ohioans “troublesome” and then say “California or Alabama” seem “compliant” by comparison, it makes you proud to be an Ohioan—home of the roughest, toughest, bad-ass, trend-setters in the USA.  We are rewriting political maps… 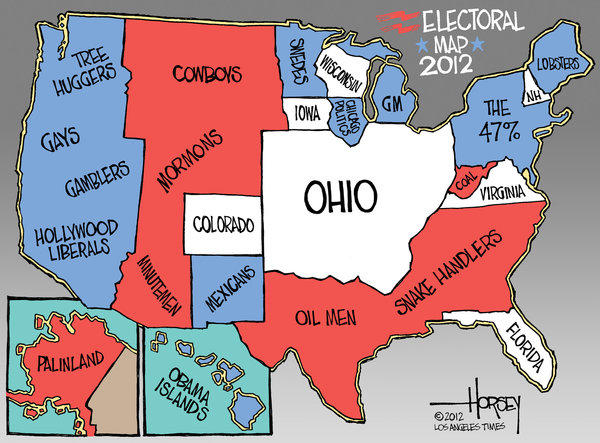 My self-esteem rises for the first time since it was smitten in Junior High.

All the political pontifications are past, and although proven inaccurate, now there’s more earth-shaking news featuring Ohio—the world recently learned that Ohio is poised to destroy the Civilized West, if you read the major headlines. No joke.

This news flew under the radar for most people. Headlines blazed with a rosy forecast saying the USA will become the world’s largest oil-producing nation by 2020, according to the International Energy Agency. This is good news for all Americans, even if OPEC nations and Oil Cartels were less-than-enthused.

How does the USA overtake Saudi oil output? The BBC explains:

The US will overtake Saudi Arabia as the world’s biggest oil producer “by around 2020”, an International Energy Agency (IEA) report has said…

The reason for this was the big growth and development in the US of extracting oil from shale rock.

This brave, “New Economic World Order” is made possible by “fracking”, a technology that extracts oil from shale. Ohio, it so happens, is one of the biggest frackers, especially here in eastern Ohio where NeoXenos is emerging. “Northeast Ohio Xenos” is buried under fracking pins on the map, below (near Akron).

This is big, big news, people! Ohio’s official motto should evolve from “The Heart of it All” (a joke, perhaps), to “Frack the World!” Ohioans can stand up to Oil Cartels disgruntled by the New World Economic Order and say, “Go, frack yourself!” (As if they could!)

(Note to Cuss Police: fracking is not a cool way to cuss without cussing, like all the “frakking” cussing in the Babylon 5 TV series—the words are spelled differently.)

Ohio: The End of Civilization

Those repulsed by the vague idea of “Fracking Fluids” are just SOL, since the frackers are not forthcoming about specific ingredients (“trade secrets,” frackers say). But Governor Kasich is rubbing against his Republican grain to push new “rules requiring oil and gas companies to account precisely for the chemical makeup of the spent fluid,” Bloomberg reports. The “spent fluids” are “typically a stew of water and a long list of chemical additives, including rust inhibitors and antibacterial agents.” What does it mean?

Without getting bogged down in the “spent fluids”, the real story with global impact is the shifting of tectonic plates apparently caused by fracking and its horizontal drilling. Government geologists (USGS) reported on NPR that Ohio and a half-dozen other fracking states are shaking tectonic plates! Other states with fracking-induced earthquakes include Arkansas, Colorado and Oklahoma, according to both the USGS and the Army Corps of Engineers.

No joke. There were “a series of bizarre earthquakes near Youngstown that have been linked to the underground wastewater,” Businessweek reported This bizarre story is worth repeating:

There had been no record of quakes in the area before D&L Energy, based in Youngstown, began injecting wastewater into a well about 9,200 feet underground in December 2010. Starting in March, there were 12 quakes within a mile of the well…The state said evidence suggested fluid from the Youngstown well “intersected an unmapped fault in a near-failure state of stress causing movement along that fault.”

Fracking fluids are lubricating deep, geological crevasses called “faults”, the USGS claims. Frackers dismiss the geologists as nit-pickers. Ohio is also the dumping ground for 12.2 million barrels of fracking fluids emitted by neighboring states like Pennsylvania and West Virginia. All these lubricants are now running beneath  my house, deep underground, so I hope the USGS is wrong.

Taken together, Ohio is clearly emerging as the quintessential state of greed. No wonder politicians love Ohio! Frackers see dollar signs under our tectonic plates, which get sucked out, and who really cares about consequences? With 176 fracking sites operated by more than 80 companies, fracking is a well-entrenched source of income and tax revenues in Ohio.

I, for one, wonder if my property could be converted into fracking dollars? The neighbors may object, but when they see the difference between a live fracking well and the hoards of students plaguing the neighborhood at my place, they could prefer the fracking. Besides, I’m a capitalist, not a socialist, so I ask, who is more motivated to preserve Ohio’s future, if not the fracking oil companies?

Whether fracking is dangerous or not, it is amazing that mankind is developing the technology to tear apart the earth’s crust and create manmade earthquakes, or at least such a potential. History proves that new technologies become new sources of destructive power in the hands of fallen mankind, from the benign laptop computer to the malevolent H-bomb. Is the Department of Defense already researching “horizontal drilling” as a potential weapon of mass destruction? I hope so, before the Russians beat us to it! If we could use horizontal drilling to frack Iran from our bases in Iraq, would that not change Iranian attitudes?

The US may become the world’s greatest oil exporter by 2020, but then “frack the world” in 2021 when the North American continent slides into the ocean on a cushion of fracking fluids. No problem, though—at least we go down as an economic success.

One thought on “Frack the World!”