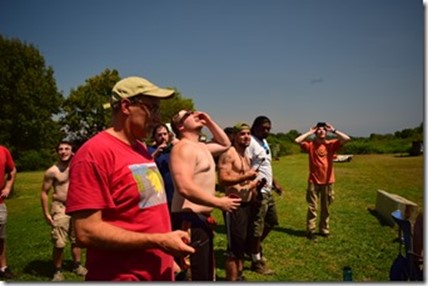 “Look! It’s the first star!” Chris yelled out to the crowd. I almost fell over because he yelled standing next to me, I jumped and nearly tripped over him, since he’s a short young man. I was blessed by Chris shadowing me as I wandered around this Tennessee mountain-top, waiting for the eclipse. He snatched my eclipse glasses if I wasn’t looking, then disappeared. It didn’t matter now. I could look directly at the sun because it was a black sun.

Mayhem broke out across the Tennessee farm with shouts and gasps because sunset was everywhere, in all directions, on every horizon! With a black sun overhead.

This is surreal, I thought, as I snapped pictures without focusing. Dumber still, I put the welder’s mask over my lens and snapped away like I carefully did each time I aimed at the blinding sun, but the sun was no longer blinding! What a doofus!  I snapped completely black pictures for precious seconds before I caught the mistake. In a world lasting three minutes, every lost second was priceless.

Everything about that day was abnormal. Our dozen-plus guys were far from Northeast Ohio, deeply embedded in Western Tennessee hill country. It was a spiritual day too. The “Totality” eclipse of 2017 gave us a taste of the disorientation Jesus described to his disciples: “There will be signs in sun and moon and stars, and on the earth dismay among nations…men fainting from fear!” Jesus was describing the cataclysmic thermonuclear madness unleashed by Armageddon, not our eclipse, of course. Now I understood if the sun, moon and stars are whacked out, it would rattle the brain. 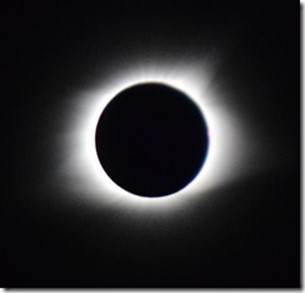 I saw more about our Creator-God during Totality than I can recall from any other natural phenomenon—which is quite a claim, because I have seen things. I was not influenced by any primitive superstition, but I could see the hand of God during the eclipse. I went into the eclipse without any spiritual expectations, fully aware of the science, so I thought we were just a dozen of the millions and millions eclipse chasers out that day. It was a rare and very natural, phenomenon, but undeniably spiritual.

The eclipse revealed our Creator, and I was not alone with that view. A hallowed sense of awe descended over the entire USA, following the path of the eclipse from coast to coast. Totality was the intersection between the majestic Creator and finite creatures stunned with awe. Even a prominent atheist, an astrophysicist, remarked on NPR it was the closest thing to a Divine presence he ever experienced—he did not renounce atheism, but he did encounter the stunned-awe any believer experienced that day.

My 96-year-old father followed the news coverage of the eclipse all day long, having nothing better to do. He said the stunned-awe was evident universally, across the country. Despite America’s “Culture Wars”, unrest, protests and counter-protests, the eclipse brought Americans together by the tens of millions, all concentrated in a narrow streak of moon-shadow called Totality. All the violence, protests, and fighting stopped, at least for a few minutes, while the Creator took the stage. 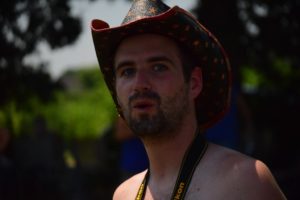 Kyle, during Totality. We brought our own hillbillies to Tennessee

That morning, as we prepared to chase the eclipse, it hit me like a Taser—it is undeniable there must be a Creator who designed the eclipse, or it would not happen. For weeks, the news media reported on the coming eclipse and kept repeated a very specific phrase: “it just so happens.” I realized all the networks used that phrase, because the moon is 400 times smaller than the sun, “and it just so happens” the moon is also 400 times its own size distant from the sun, which is why the moon covers the sun and gives us Totality, but it also enables us to see the glow of the sun’s corona. The odds of a 400 by 400 alignment between sun and moon occurring by chance are so infinitely huge, at a practical level it means it is impossible. This point does not turn atheists into believers, but makes no sense to say it happened by chance. The eclipse was designed by the Creator.

Driving a country road along the tops of the Tennessee hills, I was leading a caravan of four cars with about 20 NeoXenos nomads, pretending to know where I was going. We were dead-center in the eclipse zone, which ensured the longest spell of Totality. But this high ambition led us into the Tennessee hills where any view of the horizon was blocked unless we drove to the hill tops, but there we found trees. The eclipse was about 35 minutes away, and we could not find a clear vista of the horizon.

Exasperated and impatient, as usual, Andrew finally said we should pray. On this point I agreed with him, so I said, “Lord we are helpless!” After praying I was prodded to drive up to the next bend. “There’s a break in the trees ahead,” I said. Wrong. Prodded again. Wrong. “Look, one more bend,” I told my angst-agonized passengers. Andrew was disgusted, since he warned everyone it was a mistake to let me lead the caravan. 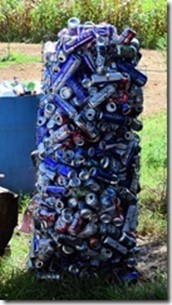 We finally came around a bend where I saw a car parked down a dead-end road, surrounded by cleared fields. It was our view! I turned into the dead-end and discovered I led our caravan into a hillbilly haven! A passel of Tennessee hillbillies were clustered around a huge tower of empty beer cans, trying to add more empties. It looked like an altar to the hillbilly beer-gods, and we interrupted a beer-worship service. So what? We found an open view and it was a public road, so we were stopping here. On a flagpole, fluttering in the breeze was a Johnny-Reb flag, a Tennessee flag and an American flag. This too was unusual.

A 40-year-old, friendly-looking hillbilly with a braided beard came out to greet me with arms raised. He held a beer in his hand, not a gun, which was good.

“Welcome! Come on over here, sit in the shade! Watch the eclipse with us!” he said. “Don’t worry, we ain’t gonna charge no dollar like some of these farms do around here.”

I followed him over to where a dozen Tennessee kinfolk sat in the shade. In 91-degree, stifling heat, shade was welcome—except here a bonfire was burning and churning out more heat, so it was probably 100 in the shade.

“Where you from, stranger?” asked a long-haired hillbilly, maybe 50 years old.

“The Cleveland area,” I said.

“You be a damn Yankee then!” he shouted and guffawed, as they all did. A Damn Yankee was a good thing? I too chortled in a wimpy, Yankee way, pretending it was funny.

“There’s an old-time hippie if I ever seen one,” said another old, long-haired hillbilly, about my age. “My name’s Charlie.”

“You got that right, Charlie,” I said. The ice was broken and we were welcomed with beers, cheers and good old hillbilly hospitality. I waved my reticent Yankee friends over, and Charlies’ people lit up joints and passed around a jug of crystal-clear Moonshine. Wait until they find out they invited a bunch of straight Christians to their party, I thought, worried a little.

My Yankee whistle-blower walked over to me smoking a joint. “I just got outta jail,” he said, handing md the joint. I waved it off sheepishly. 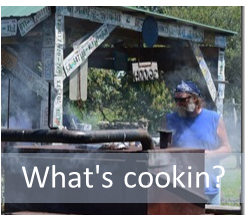 “What fer?” I said. I had reason to be confident, since I knew my share of hillbilly-talk.

Let me say these folk would not be offended being called hillbillies, especially by a friendly, damn Yankee. I’m a quasi-hillbilly expert, since I’ve got hillbilly blood from my Scottish roots, who were the original hillbillies. But I also grown up watching every episode of the Beverly Hillbillies, mainly because I had the hots for Elly May. Anybody who knows anything knows that Jeb Clampett found “black gold” in the “hills of Tennessee,” so I’ll be a skunk’s uncle if these hill folk weren’t spittin’ images of the Clampetts. The old house was ready to tip over, and Charlie’s lawn ornaments were rusty car licenses nailed all over a rickety shed. Charlie said his daughter removed the licenses to clean up the place, but he nailed them all back up. So I felt at home here, even with a jailbird. Why was he in jail?

“What fer? Oh, rape and murder,” he said, trying to remember. “And something else.” Who-ah. They let him out? “I’ve settled down now,” he added, hitting the joint again.

What a place we stumble into! Did anyone besides me notice the monstrous meat smoker Charlie was working? What was cooking? My Yankee buds were oblivious, busy laughing and yacking away like natural Tennessee hillbillies.

“I hope those aren’t body parts you’re cooking,” I says to Charlie. He slammed the monstrous lid shut and chuckled. 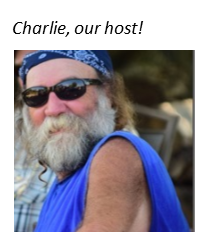 Later, Charlie called me over and said, “I hear you’re a preacher.”

“Well I’m an atheist,” he said with a smile.

So we talked. I told him I was an atheist for a few years, but I couldn’t live with it—because, after all, if the universe is just a fancy dust cloud, there is no real, universal significance, only arbitrary significance, as anyone might imagine. He agreed and wanted to know why that was a problem. I agreed with his agreement, since that arbitrary significance appealed to me, at first. But as time passed, my life denied arbitrary significance—I saw everyday we make hundreds or thousands of decisions based on what is significant, important, higher or lower priority, right and wrong, and so forth, and yet nobody thinks their choices are arbitrary. No, even atheists act and think like their choices are important and true and justifiable. Even atheists get outraged at injustice, which is silly for arbitrary ideas. At a practical level, I found it impossible to view significance arbitrarily, as an atheist should. And I’ve never met an atheist who tolerated having his judgments and values treated like arbitrary thoughts.

“Well, I think things just happen,” Charlie said, which I thought was not the greatest answer. I was making Charlie a little nervous, it seemed, which was not a good way to treat your host.

So I asked him if his parents were atheists. No, they were Lutherans. So why did Charlie become one? He went that way after his brother committed suicide at age 25. Ok, wow. And last year his son committed suicide, Charlie added. “So, you know, things just happen.”

“Ok, I see what you’re saying,” I said. I was a little stunned. So we talked more about the old days, until Charlie surprised me again.

“I want you to meet my wife,” he said, pointing at the house. “The only the grey-haired woman.” When I found her, I was treated to another education in Tennessee culture.

“I’m a Holy Roller preacher,” Candice told me. She was a pleasant woman (“a large woman”, Charlie told me), and she was pleased to meet another Christian preacher. “I say if you can’t feel the Holy Spirit, you ain’t got him,” she said in the Holy Roller tradition, which I knew about mostly from hearsay because Holy Rollers are an anachronism—but apparently not in the Tennessee hills. They might be called Pentecostals today, but Holy Rollers were a little different, focusing more on personal holiness than speaking in tongues, like Pentecostals do.