Stripping it all off—the young and vivacious feelings, how refreshing it is, how much stronger and sinewy it feels—beneath the layers of personal feelings people espouse about Yoga, for decades Christians could objectively see the marks of a cruel and counterfeit spirituality stamped all over it. Until recently. 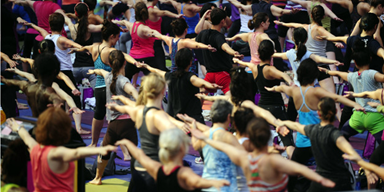 Under the new USA-Tolerance Mandate, of course, all spiritual paths lead to the same Deity. All spiritual views are benign, except all views that exclude other views (except the Tolerance-exclusionary rule excludes itself from exclusion). So now, Yoga-spirituality is good, especially since it is “a universal language of spiritual exercise in the United States, crossing many lines of religion and cultures,” according to President Obama.

Under the Tolerance Mandate, Christians can now freely embrace “a Christ-centered yoga practice,” according to a Christian-Yoga Web site. “This is a practice of reclaiming and redeeming numerous biblical principles such as meditating, complete surrender and whole worship as Acts 17:28 describes, ‘In Him we move and breathe and have our being.’ The ancient Vedic literature parallels many of these biblical principles.” But “meditation” in the Bible means focusing and cognitively thinking about God’s word, “meditating day and night,” as Psalms 1:2 says, while meditation in the “ancient Vedic literature” means emptying the mind of any conscious thoughts—are these “literature parallels” actually not antithetical definitions?

Christians who still recognize and object to the spiritual nature of Yoga are much like the parents in San Diego who objected to public schools compelling their children to practice Yoga. According to Scripts-Howard news, the judge ruled the “school district is not teaching religion through its yoga classes for students, even though yoga is a religious activity.” Excuse me? It seems nonsensical, especially since the school’s yoga program “was funded by a $500,000 grant from the K.P. Jois Foundation, which promotes Ashtanga yoga.” The judge called “the influence of the Jois Foundation on the EUSD [school district] ‘troublesome,'” yet agreed with one of the school’s yoga teachers, who claimed, “What I am teaching is not religious.”

If a Superior Court judge agrees with a yoga teacher, “What I am teaching is not religious,” why do Christians still object to Yoga?

Non-inclusive Christians began objecting in the 1970s and 80s, when Yoga entered American pop-culture, completely misunderstanding the non-religious nature of yoga. As CNN reports, “yoga is not a religion in and of itself, it is a philosophy, rooted in Hinduism, composed of a system of various practices designed to heighten spirituality.”

Excuse me for my dense mind, but I don’t understand…

The apparent doublespeak is easily resolved: since yoga’s “heightened spirituality” actually is “crossing many lines of religion and cultures,” as President Obama said, it cannot be pinned to any one religion.

So why object? Why not adopt? Yoga meets the guidelines of the new Tolerance Mandate, and joining the yoga craze might help Christians become more tolerant and tolerable!

What Obama called “the universal language of spiritual exercise” must be good, not only conforming to the Tolerance Mandate, but also it is spiritually helpful.

For example, “middle-school students taking yoga reported positive mood and attitude changes, increased energy and improved ability to relax,” the CNN yoga-evangelist said. Mood and attitude are not religious concepts. As the CNN yogi continues, “When children do yoga, they aren’t practicing religion; they are training life-enhancing abilities that can positively impact every child, regardless of faith.”

Exactly what “life-enhancing abilities” does yoga impart? They are “profoundly valuable mental skills, like self-control and the ability to manage stress,” explained the CNN yogi. No wonder the California Superior Court judge ruled, “I see nothing religious about that.” What is religious or philosophical about self-control and stress management?

If it still seems confusing whether yoga is a spiritual belief system, it could be caused by living in a confusing era of Tolerance-mandated doublespeak. People are generally confused about what a spiritual belief system is. What the yogi calls “mental skills” in reality are philosophical-spiritual-religious teachings, but this obvious fact is unrecognizable in a Tolerance-conditioned culture. The Tolerance Mandate itself is confusing, since Tolerance actually means “acceptance” and “agreement,” not “tolerating disagreement.” Doublespeak is at the heart of the Tolerance Mandate. Doublespeak it at the heart of the new “universal language.”

As the Harvard Medical School observes, “As yoga continues to become more popular in the U.S., we must not lose the true spirit of yoga as one of compassion, awareness, and acceptance. With this message of inclusivity, yoga and its benefits can become more accessible… The fundamental philosophy of yoga encourages being non-judgmental and compassionate to others and ourselves.” Rather than a religion, “Yoga is about becoming attuned to our individual self — body and mind — and making room for exactly where we are, while letting go of judgment.” In the medical opinion of Harvard Medical School, there is nothing religious or spiritual about “becoming attuned to our individual self”.

Undoubtedly, the California judge would say, “I see nothing religious about that.”

Is yoga simply a physical exercise, like a new form of calisthenics? No, by all accounts, yoga’s strength relies on its spiritual components, or its “mental skills,” using a less-religious phrase.

In the next Christian Yoga installment, we will examine the reasonable, biblical arguments for why yoga and Christianity have irreconcilable differences.