We typically don’t think about the atmosphere we breathe unless it suddenly, noticeably changes. It seems incredible today to watch older movies where everyone smokes in newsrooms, hospitals, court rooms and everywhere else, but smoke-filled rooms were so commonplace before the ’90s, nobody noticed or cared or dared to say something. Light up a cig in a hospital today and watch what happens! The harmful effects of smoking were known for decades, but people ignored smoke-filled rooms since they were so universal. 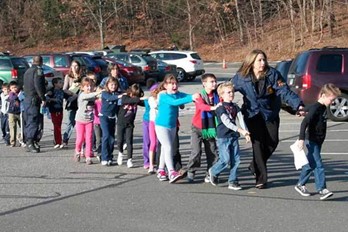 The pervasive crisis of mass shootings and especially school shootings must be symptomatic of a poisonous atmosphere in the USA. Since Columbine in 1998, school shootings have skyrocketed like a “Rage Virus” outbreak, gaining momentum every year since, with no relief in sight. Nobody can explain why. Nobody understands it. Everyone is shocked by the phenomenon. Without any clues for a solution, the only option people can see is removing easy access to guns, especially assault rifles and high-capacity bullet cartridges, but at best these efforts can only reduce the number of victims in mass shootings. It’s like addressing the Rage Virus with aspirin. According to CNN there were 45 school shootings in the first 46 weeks of 2019.

CNN recently performed an exhaustive study of 180 school shootings over the past 10 years in order to find some pattern to this Rage Virus, looking at “locations, time of day, type of school and student demographics.” Their definition of “school shootings” broadly included any kind of shooting on school property, including drug deals and drive-by shootings, so “school shootings disproportionately affect urban schools,” while “mass shootings are more likely to occur at white, suburban schools.” The “mass shootings” cause the greatest alarm, since other shootings at least have a known cause like drugs or gang turf battles, even if they too are quite alarming. But school “mass shootings” are more terrifying, with invisible sources, entirely unpredictable.

The exhaustive CNN study confirmed no good rhyme or reason behind school mass shootings. “With little federal data on school shootings, it’s hard to pinpoint what’s behind the recent increase,” CNN admitted, but went on to offer general speculations, like “law enforcement experts believe one reason could be diminished coping skills, which can prompt people to lash out in violent ways.” These speculative causes were unsupported by CNN’s study, and they seem so vague it’s impossible to know what to do about them.

CNN concluded their full year of research by saying, “To prevent school shootings, experts agree we need comprehensive and reliable data. Without that research, we’re going blind into a ‘deadly future,’ cautions Mark Rosenberg, who worked at the Centers for Disease Control and Prevention for 20 years and led its gun violence research.”

Amazingly, there was no effort by CNN or the CDC to correlate school shootings with family dynamics, like broken homes, absentee fathers, divorce, or domestic violence, even though the correlation has been well documented by researchers going back at least to 2013, if not earlier. As the Heritage Foundation reported earlier this year, “a majority of school attackers come from broken homes, often growing up with absent fathers or in the midst of divorce or domestic violence.”

In 2013, the Institute for Family Studies reported, “From shootings at MIT (i.e., the Tsarnaev brothers) to the University of Central Florida to the Ronald E. McNair Discovery Learning Academy in Decatur, Ga., nearly every shooting over the last year in Wikipedia’s ‘list of U.S. school attacks’ involved a young man whose parents divorced or never married in the first place.” They identified broken homes, “one common and largely unremarked thread tying together most of the school shooters that have struck the nation.” This “unremarked thread” since 2013 has remained “a sobering theme repeated over and over in the biographies of school shooters—the fatherlessness of a broken or never formed family,” the Heritage Foundation reported in 2018.

According to that 2018 report, the glaring family problem is also well-substantiated by secular researchers at Harvard and other criminologists, like “the work of criminologists Michael Gottfredson and Travis Hirschi, which found the absence of fathers to be one of the ‘most powerful predictors of crimes.'” Shooters no-less famous than Lee Harvey Oswald, who assassinated President Kennedy, was raised without a father figure and carried that scar throughout his disturbed, violent life. The glaring family problem has been documented in books, in scholarly journals, by sociologists, criminologists, psychologists and an endless parade of other scholars and researchers.

So how is it, in 2019, after so many endless mass shootings, the CDC and CNN can possibly conclude, “we’re going blind into a deadly future”?

The above evidence points to the suffocating, poisoned atmosphere governing American life which goes largely unnoticed—namely, the devastating and violent effects of broken and unformed families. Why, if everyone wants answers, would this clear connection be excluded from public discussion?

Since the overwhelming majority of households consist of broken and unformed families which are “the most powerful predictors of crimes,” including violent crimes, why does the CDC not declare family dysfunction a “national health crisis,” as they do with other social phenomena like opioid addiction or suicides?

Most important, why are Christians the only ones raising alarm over this growing national health crisis? The same facts cross the desks at the CDC, CNN, and everywhere else—these are not terribly obscure facts—but everyone remains clueless, ignoring the obvious.

Is it possible that divorce traumatizes children? If so, why is this trauma so widely ignored (or suppressed) even though it affects tens of millions of children everywhere in the USA?

One simple statement from God answers all questions above:  it is a consistent, single issue, one cause, one direction, “according to the course of this world, according to the prince of the power of the air, of the spirit that is now working in the sons of disobedience.” (Ephesians 2:2) Specifically, we breathe an atmosphere poisoned by “the prince of the power of the [air or atmosphere]” spiritually smothering human cognizance on this planet. That same Prince smothers the truth about the growing cancer of American family life.

When most people smoked cigarettes, people worked and lived in smoke-filled rooms. They noticed and yet they didn’t notice. Non-smokers would say, “It stinks, but what can you do?”

Today most people at the CDC and at CNN and at research centers everywhere are either divorced, divorcing, about to be divorced, living in unformed families, same-sex families, polyamorous families, cohabiting or many other modern family alternatives. The possibility of examining family life as a social problem or a cause for shooter violence is a non-option.

Just as the Modern Family sitcom mocks the chaos and minimizes the emotional toll of dysfunctional families, so too Americans are deeply conditioned to accept a world where families cannot work in any stable manner, even for the sake of emotionally vulnerable children. The emotional fallout is so severe that England instituted a “Ministry of Loneliness” but dared not institute a “Ministry of Family Cohesion” or something—anything—to address the modern, dysfunctional family.

If ever there was proof of a poisoned, spiritual atmosphere and its lock-down on the American mind, the dismissal and ridicule of family dysfunction must be considered ominous proof. Is it easier to live with unknown terror than look to God for answers?